Following is a step-by-step guide that will help you to Install Facebook on FireStick. The app is available for not only Firestick but also the pendant-style Fire TV, Fire TV Cube, and Amazon Fire TV Edition Smart TVs.

In this golden age of the Internet, pretty much everyone and their dog have used Facebook at least once in their lifetime. It not only connects people together but also serves as a media sharing platform that targets to capture large groups of audiences intentionally, or unintentionally.

Now you may or may not like Facebook for its recent deficiencies and privacy issues. Still, Facebook’s video streaming platform has matured to a point where it has the chance to dominate YouTube, which is currently the biggest streaming service in the world.

Facebook’s video-on-demand service is now branded as Facebook Watch, and today we will tell you more about it and walk you through the guide to install the Facebook app on Firestick.

In 2017, Facebook started to roll out its VoD service called Facebook Watch in the US, which is now available in several other countries as well. As a video streaming service, it works the same way as YouTube. Users receive personalized recommendations, along with different video categories based on your viewing activities.

You can follow your favorite creators and channels to receive the latest videos, as well as live content in your feed. Whether it’s entertainment, short skits, news, live sports or sports conferences, and movie clips, the possibilities for content are endless on Facebook Watch.

Facebook is currently offering multiple ways for creators to monetize their content on the platform, which has already attracted a lot of influential creators on YouTube. They have also been working with multiple television networks to bring big-budget web series for users to watch.

The Facebook Watch doesn’t have its dedicated app on Firestick. The app is listed as ‘Facebook’ in the Amazon App Store, which is a bit misleading considering that some people might be interested in browsing through their regular Facebook feeds on a bigger screen. However, with the addition of videos and podcasts from thousands of creators, you can also watch the videos your Facebook friends have shared, and the ones that you have uploaded yourself to Facebook.

The Facebook app on Firestick resembles the older version of the YouTube app in many ways, which makes it much easier for new users to familiarize themselves with the app’s interface.

There are multiple categories on the left-hand side of the interface, which are Search, Home, Live, Your Videos, and Settings. For the best experience, it is recommended that you log in to the app with your FB account first, so that you can receive content suggestions tailored to your watching habits. Simply click the login option and enter your Facebook account credentials to log in to the app. 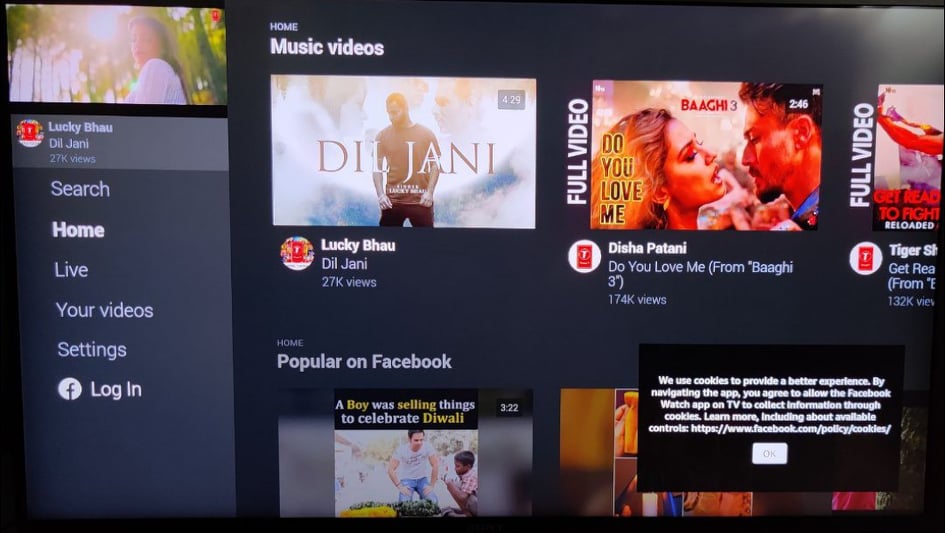 On the Home page, you can scroll infinitely through the video suggestions, and the content your friends are sharing. The Live page consists of live content, which includes live coverage of breaking news and gaming live-streams.

You can also watch the videos that you have previously chosen to share with your friends, liked, or bookmarked for watching later. As of now, the Settings page doesn’t have any options whatsoever.

The web player does support play/pause, rewind, and fast-forward functionalities through the Firestick remote. You can also scrub through the videos manually with the progress bar in the player.

This guide covers the installation process of Facebook on Firestick, as well as a short overview of the app for new users. In some countries, the Facebook app is also listed as ‘Facebook Watch’ in the Amazon App Store, which is something you should look out for.